Monster Hunter: World is absolutely, super-objectively one of the best games ever made. That means some poor souls at Capcom were presumably tasked with finding a way to best that experience on hardware with just a fraction of the muscle with the Switch-bound Monster Hunter Rise.

And they went and kind-of, sort-of did it, too.

That doesn’t mean Rise is bigger or fundamentally better than World, exactly. More refined, perhaps. But it doesn’t feel like its built on what came before – it’s not quite World 2. Rise might be better described as that kooky sidekick that does strange things in a locked room on the weekends, a companion that plays with some of the modernisations of its older brother. World Lite: Gaiden, if you will.

Rise is a more accessible, abridged Monster Hunter, cutting the fat to get to rib cage of what makes it great. That absolutely makes sense for portable play: jump on the train, jump into a fight – be done with the former before you’re done with the latter. From its condensed single-player hub to the removal of inconvenient series-staple mechanics, Rise is all about getting to the point: killing big things with friends for cool prizes. Tiresome footprint tracking, gone. Paintballs to mark your target, gone. Drinking hot drinks to stay warm, gone.

If Rise had a motto, it’d be something like ‘Fight now and fight often’.

If Rise had to be labelled a follow up to something, World’s Iceborne expansion might be it. The latter’s grappling hook lets you cling to the side of big nasties and effectively carve your name into their rock-solid hide. You can’t do that here, surprisingly – but it has been replaced by the Wirebug, which lets you point, click and project yourself in your direction of choice.

Your Wirebug takes you where you want to be as quickly as you need to be there. No need for a fixed point or a monstrous backside to latch on to, no need to jump off a ledge and risk the miss – just time your bug-jump just right to launch into your combos. Gone are the days when combat felt like a case of horizontally aligning your character with a monster and hitting in a place where it couldn’t hit you. Rise is about being hacky-hacky slashy-slashy as much as possible – and if you’re not being hacky-hacky slashy-slashy, it’s all about getting back to it as quickly as possible. More than ever, Capcom’s seminal murder-sim feels like a full-on action game. 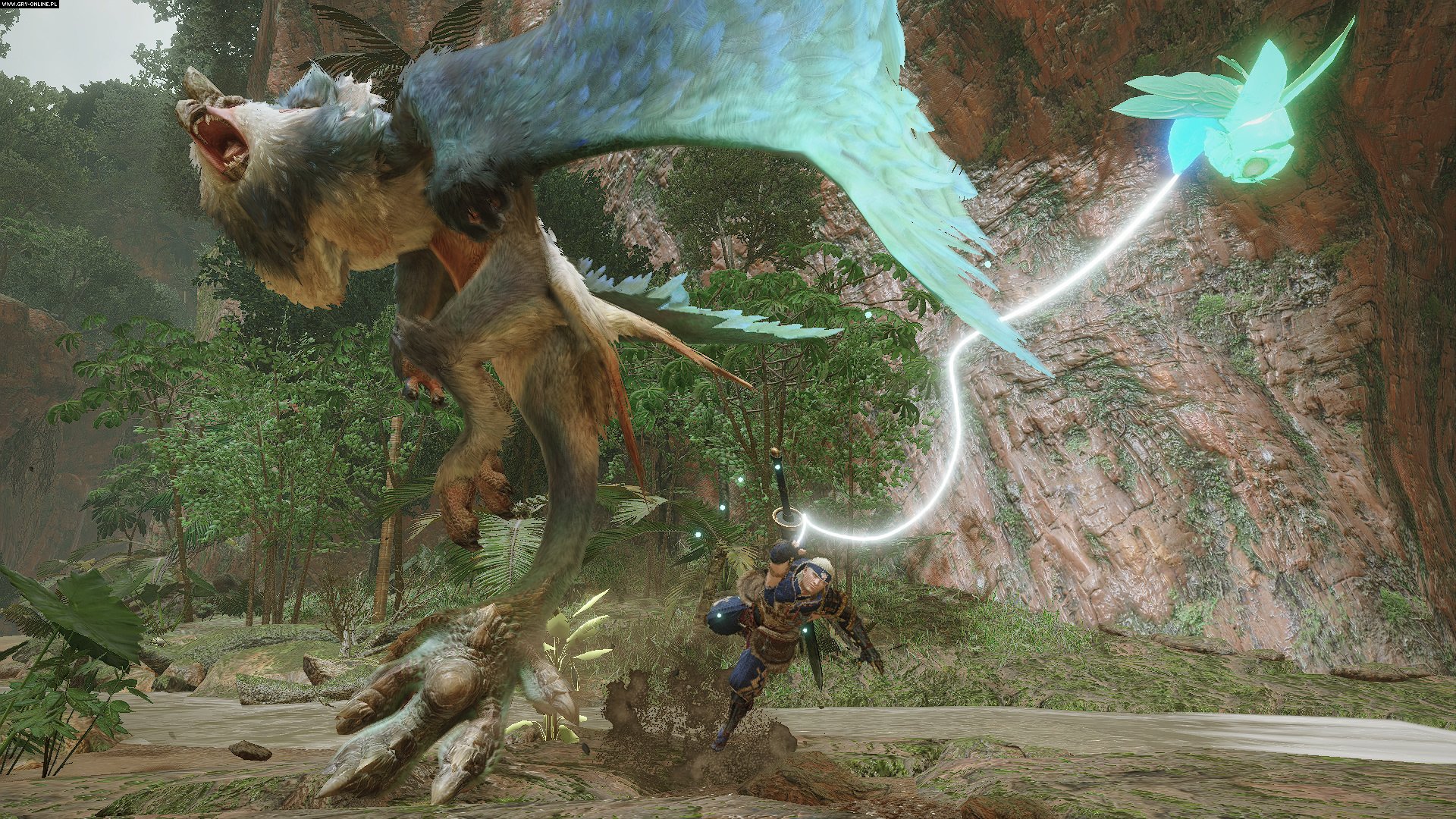 It still feels like Monster Hunter – but lighter. It’s joyful, almost giddy. Previous games’ vertical worlds had you climb lush, vine-topped cliffs, only for combat to be reduced to toe-sucking a big bad as you wail at its feet. Up never felt like a word in its combat lexicon. Here you can dash up, slash down – or zip out the way of an incoming haymaker. There’s a speed and immediacy here that series has never quite seen before.

And that feeling bleeds into almost everything in Rise. Palamutes are rideable combat mounts that jump and ash throughout the terrain get you back to the fight. You can even use items on them, too. Uber your way back to the fight as you heal, sharpen and plan the next phase of the fight. That mobility lies at Rise’s beastly heart, transformative for new players who lamented its slower, deliberate pace, and liberating for long-time veterans who’ve grown tireless of the same old song and dance of track, attack, recover. Now, it’s attack, attack, attack – with its former downtime feeling as prehistoric as the things you’ve sworn to slay.

In putting its foot on the gas, Monster Hunter has finally found its fun. It understands its own best qualities and wants to share them with you as much as it can. A small revelation on a small device for a large, long-running series, it’s impossible to believe Rise’s bag of tricks won’t find its way to the inevitable sequel to Monster Hunter: World. And they absolutely should, by the way. Like World before it, Rise is iterating itself towards a streamlined, more accessible vision of the 2004 original. Perhaps Capcom were bolstered (see: surprised) by the success of World, giving the publisher the confidence to cut those more tedious, long-standing mechanics.

Rise, then, provides an entryway for some where one didn’t exist before. Its single-player campaign is easier than ever and it’s easier to get into doing whatever it is you want to do. And after nearly two-decades, it feels like Monster Hunter’s moment-to-moment combat is almost as expressive and crazy as everything surrounding it – and it’s a small revelation on a small device for a large, long-running series.