Outriders is exactly the kind of game you’d expect at the start of a generation – just not this one.

It’s the video-game equivalent of a Rorschach test, and what you see is determined by your nostalgia for naughties-era sepia-tone shooters. That’s exactly what Outriders feels like: putting on a pair of slippers you’ve worn a thousand times before, snuggling up to a concrete slab, popping up and taking a shot. Part Gears, part Mass Effect, part The Division – with the latter’s class-based character customisation and ability-driven combat front and center.

Say no more, then – we’ve been here before. A tried and true looter shooter: kill stuff, collect stuff, decide which stuff to wear, then kill more stuff to collect more stuff with up to two friends.

Brilliant, you’re thinking, sign me up. Indeed, Outriders sounds pretty awesome on paper – except it all feels a bit direct-to-DVD in action, a bit direct to Game Pass. The chasm between Outriders‘ ideas and Outriders‘ execution feels truly generational, like a game built in a different time for a different set of boxes. Its heart’s in the right place, but its head can’t put it together in a way that matches the quality of its contemporaries.

Returning to the stop-and-pop shooters of yesteryear is a bit like watching your favourite ’70s sci-fi serial decades later to discover its sets are made of cardboard and its aliens are made of human. It just all feels old. Small snafus erode that nostalgic goodwill – from inventory screens taking a second longer to appear than they should, to weapons with different abilities having similar icons so you can’t quite remember what’s what in the middle of a fight.

And two hours in, that fight hasn’t really deviated from clearing a series of vaguely box-shaped arenas of a series of vaguely-human shaped baddies. It’s not shy about sending in a conga line of space dudes desperate for a bit of the old after-life action. Like that pair of old slippers, combat is predictable, safe and comfy.

But it really has to be said: Outriders is more fun that it is good. A trope, a cliché, call it for the disgusting sentence that it is – a way of saying a game is fun without being able to articulate why. Outriders has that in spades, though. Blast through waves of armoured goons again and again and again with class-based special abilities and a collection of oft-dropped chunky weapons. For all its small failings, Outriders really is a bit of alright, and might even be a game worth playing because it gets its moment-to-moment mayhem just right enough. 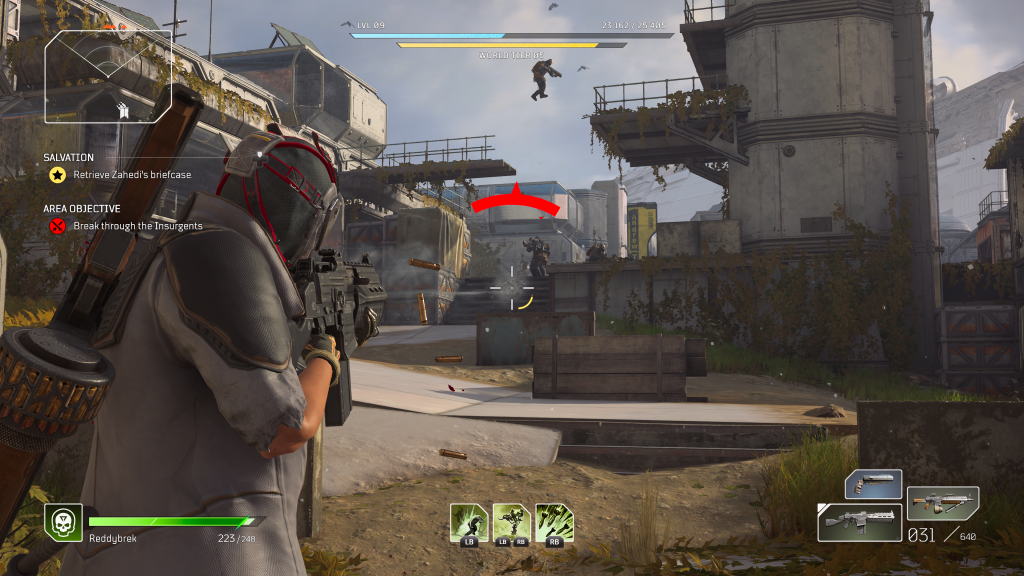 It’s a video game’s video game that’s sufficiently video-game like in all the right ways. Good enough is still good enough here. But like one of those same ’70s sci-fis where somebody time travels from flying on star ships to riding on horseback, there’s a adjustment period before Outriders starts to feel like good, old-fashioned fun. That time-travel portal comes with some short-term side effects – including frustration and befuddlement.

Push through that, and it really is good old-fashioned fun. Outriders’ hyper-aggressive goons are literally dying to kill you. Developer People Can Fly really, really wants you to not feel too safe behind that bestie of a concrete slab. You’ll get blown up tons, you’ll get shot plenty, and the goon squad aren’t afraid to charge or go for the cheeky flank. It’s handy, then, that you’ve got a selection of super-power ability thingies to help you dispatch those never-ending conga lines.

Outriders wants you to use those abilities, and it wants you to use them often. Explode some bad guys with a torrent of missiles or freeze them with an automatic ice turret. Poison them with toxic bullets or emit healing energy to sure up teammates. Weapons are your usual Diablo-Destiny affair, with their attributes and unique abilities like per-shot healing or heal on kill. Their availability is probably the game’s greatest strength: it’s not afraid to put you in scenarios that demand those abilities be used, with brisk cooldown times for plentiful use.

So, it’s still a decent game. On its own terms, Outriders is simply fine. It’s grey-green-brown world has felt irrelevant so far, suggesting that there’s something about combat that’s able to carry the rest of it. Whether that’s because it’s an accidental – or purposeful – throwback to my teenage years of the so-called high-def generation, or because it’s a solid time in its own right, isn’t entirely clear.

And just a few hours in, it seems like the latter is true. You might find a good time in a game from times gone by, nostalgia or not – if you’re on Game Pass. But as we enter a generation where games cost about as much as my monthly electric bill, Outriders has arrived at the last moment where it might just fly. A game made in 2006 will likely struggle in the generation to come, meaning it might work and only work now – but whether or not Outriders can continue to trade on its nostalgic goodwill and work for the remainder of its run time really remains to be seen.