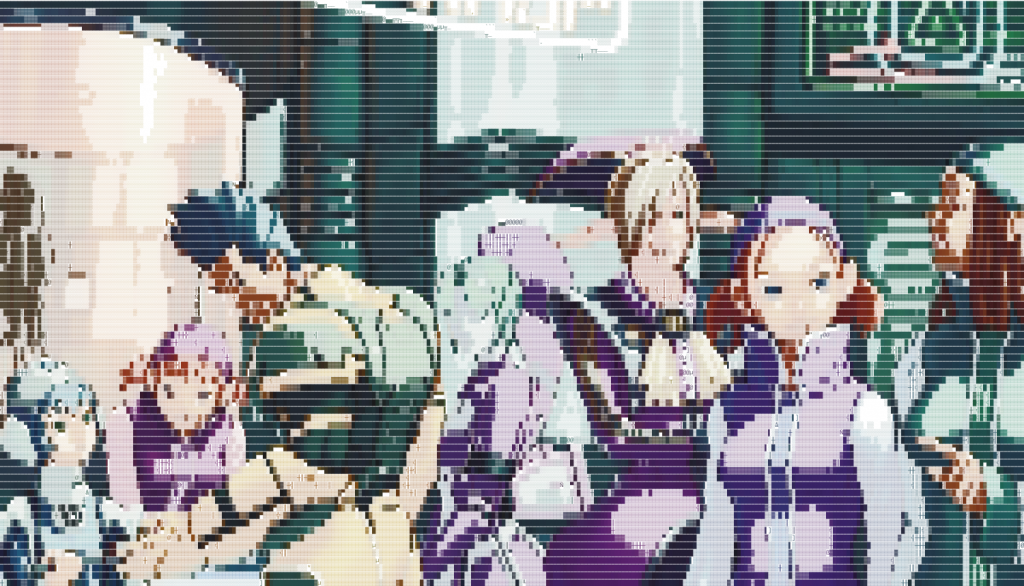 Yet ask folk about PSO and you’ll hear something about how you spelt ‘fantasy’ wrong, or how that’s ‘the one where everyone’s got spiky hair and rides big yellow birds’. Indeed, we live in a timeline where everybody’s played a spiritual successor to Phantasy Star Online — but few could tell you exactly what the damn thing is. Tragic.

Let’s fix that by taking a look back at what PSO actually did that was so gosh-darn fantastic, and why it never quite made it into common video game parlance.

Let’s go back to the future.

It was the eve of the decade that gave us Windows 95, Doom, and a console called Dreamcast, a modest white box with space-age internet connectivity that came with corporate want for a game that uses it. Sega chief Isoa Okawa tasked Producer Yuji Naka and the seminal Sonic Team with the creation of a flagship online game. That title later adopted the mantle of long-lying Sega franchise Phantasy Star.

In 2000, that team released the aptly named Phantasy Star Online: a 3D, third-person online action RPG with tiered loot drops, bullet-sponge bosses and level-based progression. I know, I know — it’s a cliché followed by a cliché followed by a cliché. A description so covered in the fingerprints of marketers that it’s almost impossible to see just how pioneering Sonic Team’s vision was for its day.

That might be the reason PSO isn’t name dropped alongside the likes of Grand Theft Auto or Halo — and yet its influence is arguably more profound. Those examples hold sway over genres, whereas Phantasy Star Online defined what a connected console game could be. That bit’s important, too. Click-fest counterpart Diablo II launched just months prior and was nowhere to be seen on consoles. Original Diablo appeared on Sony’s grey rectangular box in 1998, sans online.

Play Destiny, play The Division, play Outriders — and you’re playing Phantasy Star Online. You’ve heard this story before, and you’ve played it a thousand times more: get loot, get stronger, and get ready to take on the next difficulty level as you slaughter room after room of nasties with your polygonal peers. If all food tastes like chicken, then all online console RPGs more or less play like PSO (and Diablo before it).

All this built on the forward-thinking futurism of Sega’s modem-carrying console, making it especially apt that Naka and co. dressed the game in the futuristic sci-fi chic of Phantasy Star. A world with spaceships and laser swords and pew-pew guns atop an online service with people who were always playing in a place that was always waiting. Little did we know back then we were playing the future in more ways than one.

Back Then, The Future Was Now

Land on Mars today, and you’d find it littered with online coop action RPGs. Back in 2000, though, the only way to play Diablo online was to play Diablo online. If you couldn’t — maybe your parents thought its demonic themes were a gateway to abilities many considered unnatural — then Phantasy Star Online was your hell-free ticket to Loot City.

And if it was, PSO was likely the first time you’d played an online RPG. It’s also likely the first time you beat a co-operative boss fight over the web, or the first time you’d created an alter ego and lived a different online identity in parallel to your own. You weren’t a spotty teenager studying law in college, you were DESTROYER — a level 35 HUcast. That identity and the world it lives in were always waiting for us, and we were always waiting for them. You waited to get home from school, from work, from being asleep, just to play in Sega’s slick sci-fi universe.

Those firsts are almost endless. It’s the first time many of us shopped for digital gear with digital people over the web, or the first time we stood around doing absolutely nothing in a lobby that didn’t demand you kill a single thing to justify being there. For the first time we could exist in a tangible, three-dimensional space without having to do traditional, video-game things — all while forging meaningful, long-lasting friendships.

But we couldn’t have forged those friendships if Sonic Team hadn’t transposed the essence of Blizzard’s RPG darling to console in a big-brained way. Browsing lobbies wasn’t confined to some flat, fiddly UI. PSO let us idly roam with strangers before jumping into a game — a low-fi, three-dimensional form of matchmaking. On-screen keyboards with customisable messages and an assortment of expressive emojis made building those relationships possible like never before.

And you could do it all from the comfort of your measly earth-bound couch.

PSO became known more for its vibe than the minutiae of its narrative. It was a feeling, a sense of place — defined by the artistry of Satoshi Sakai and the beeps and boops of long-time Sega composer Hideaki Kobayashi.

In Team Sonic’s online world, occupants of spaceship Pioneer One are sent to renew their species on the haven planet of Ragol. A catastrophic explosion wipes out the planet’s colonists, transforming a lush world — idyllic even to the very last — into a twisted Eden. You, dear Hunter, are tasked with investigating the mysterious happenings of a place that’s lived in but without life — a stark contrast to its introductory FMV of star-bound spaceships scored by a triumphant orchestra. It’s a wonderfully manipulative set up for the tragic fall to come. Doubly so when you realise loot drops were once supplies of the missing colonists, making you a walking monument to those who risked their lives to chart a new frontier.

But in the midst of Sega’s fallen world we charted our own frontier, essentially paying to prove that an online console RPG with a monthly sub could actually work. That’s baffling by today’s standards: a full-price game with nary a live-service ‘perk’ in sight, where additional content largely comprised the occasional downloadable quest and Christmas-themed lobbies. But there was an honesty in that transaction. A set game meant you needn’t worry about missing out on the latest store drop or getting left behind by the latest DLC pack. An indication of a simpler time, where never a thought was spared for drop rates and algorithms. The idea that somebody would waste their life getting me to waste mine to keep that monthly subscription rolling in would’ve been wild back then, and still is now.

But that monthly fee was just a lottery ticket for a chance to win those mythical red-box item drops, the all-mighty dispensers of legendary weapons like Black King Monkey Bar and Heaven’s Punisher — novel murder trinkets that justified your very reason for virtual living. We chased the dragon to be able to kill the Dragon. For we vets, PSO is a synonym for red box.

The Devil’s in the Details

In an interview with Polygon in the apocalyptic year of 2020, PSO script writer Akinori Nishiyama said that the “genesis of PSO was rooted in Diablo, and the producer wanted to make something along the lines of a console version for Dreamcast.”

Whether or not they succeeded is for each of us to decide , but making the case they succeeded and surpassed that goal by crafting something that wasn’t just Japanese Diablo in space is super duper easy. It’s all the ways Team Sonic went above and beyond to escape that moniker that makes PSO truly fascinating, seemingly powered by their willingness to meld the spirit of Blizzard’s demon-slaying simulator with the spirit of a console game. ARPG typically means action role-playing game. Here, it would be just as apt to say accessible role-playing game.

Mags, for example: glorified cyber pets that sat on your space shoulders. They were an extension of you, modifying your stats and providing benefits such as emergency healing and super-powered photon blast attacks. They were hungry things, too, needing items — potions, revivals, antidotes — to grow. Each item pushed your mag towards a specific evolutionary path, with each new stage bringing with it its own benefits and appearance. In a world where armour was relegated to an option in a menu, mags and weapons became your signature showpieces — real silhouette changers.

Mags are a big-brained example of how PSO distinguished itself from Diablo, taking intimidating, near-irreversible stat point attribution and tying that to something you can swap out anew. If your build was bad because your mag had been raised in a wonky way, then just raise a new mag to build a new build. That, along with in-game, controller-based chat, in-game weapon switching — which makes sense in an online world — PSO, like Halo a year later, knew what it had to do to work on a video-game box, but never quite made it into the same genre- or platform-defining pantheon as Bungie’s shooter.

But why? For one, PSO was an internet-connected game — which in itself would’ve cost money per second played — that required a subscription fee on unpopular hardware which later received ports to consoles that got stomped by a competitor, of which said ports had the visuals of a then 5-year-old console with the same dodgy draw distance. Or something.

In short, PSO was a relatively accessible game but a relatively inaccessible product for its time. But that product did find success, selling well over a million copies and winning a bunch of awards. It arrived on Xbox and GameCube in 2003 as Phantasy Star Online: Episode I & II, introducing yet another generation of would-be Hunters to online console RPGs — and my personal entry point. Beyond that, GameCube received Phantasy Star Online: Episode 3 exclusively in 2004. Phantasy Star Online 2 launched in 2012, going on to generate over $900 million in revenue from over 9 million registered players in the decade that followed.

Even the original Phantasy Star Online continues to this day via private servers allow you to play the experience as it used to be — even on consoles. Crazy.

Still, it’s ironic that Dreamcast was the flagship set to take Sega into the new world of the next-generation, a technological marvel that would soon find itself destroyed by the apocalyptic machinations of a cut-throat industry. But if hardware home to an experience that set new standards for console connectivity and transmogrified a genre once bound to the confines of a keyboard into a few buttons on the end of a cable, you could argue it was all worth it — that the Dreamcast’s fleeting life was a bright and influential one thanks to Sonic Team, who arguably led us to a connected future as bright and triumphant as PSO’s opening FMV portrayed.